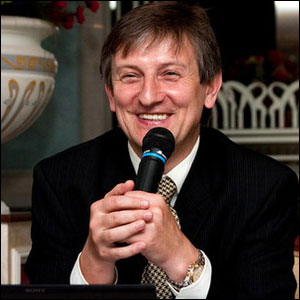 The economist pledged to increase retirement benefits to 43 percent of the average monthly wage, raise the average pay of young professionals to $400 and of physical education teachers at schools and coaches at junior sports centers to $500, as well as secure fare-free public transport services for retirees and university students as early as next year."
at 11:54 PM

The skies over Europe won't be cleaned by electric cars but only by a well-regulated free public transport.

I was following a debate of the German parliament about electro mobility in the 21st century. Judging by their speeches, 99% of the speakers talked about electric cars while only 1% about public transit. At the same time, the news ticker on the bottom of the screen said that German Transport Minister Ramsauer wants to cut budget for railroads.

Pure coincidence? Certainly not. Lobbying for the benefit of electric cars is under way and not just in Germany. Euphoria and conviction that only electric cars can save us from further air pollution is spreading all over Europe.

Where would the electricity come from? Nuclear power plants, of course. Is this coincidence, too? Not at all. Everything is agreed upon in advance and then confirmed in the parliament by majority. The public is of course excluded from these important decisions because it could negatively impact such agreements.

What about the environment and health of people? Politics is not interested in that. What interests politics are taxes and cash-loaded treasury.

The future lies in a society that will succeed in putting social and environmental interests before personal gain. EU has not this goal therefore her stars keep fading away.
at 7:26 AM

Euroalert.net - Report card sounds warning bell for Arctic - News about the European Union: "An international group of environmental experts is waving another red flag as new research from the Arctic region shows that the area is not getting any relief from climate change, which is impacting not only the ecosystems and the lives of creatures living there but also the weather patterns in the most populated parts of the northern Hemisphere. The findings are presented in the 'Arctic Report Card', an annual review of the conditions up north."
at 4:32 PM

Japan with 500 km/h into the 21st century. What about Europe?