Could not be more simple, capitalism wants more people, cares nothing for biosphere

Freiburg, Germany, give up your car, get #freetransit

The Guardian: "Freiburg in Germany has 500km of bike routes, tramways, and a cheap and efficient public transport system. One suburb, Vauban, forbids people to park near their homes and makes car-owners pay €18,000 for a space on the edge of town. In return for living without a car, people are offered cheaper housing, free public transport, and plentiful bicycle spaces."
at 9:50 PM

Adam Smith Institute: "But, the evidence doesn’t stand up. What underpricing parking actually causes is excessive congestion as the scarcity of parking spaces encourages drivers to cruise around looking for an empty space. Prof. Shoup looked at sixteen different studies, which measured cruising behaviour in the central business districts of major cities. He found that they average time spent cruising for a parking space was around 8 minutes, and that at any one time 30% of cars in the traffic flow were cruising for a parking space."
at 11:28 PM

"We don't need cars in Paris" 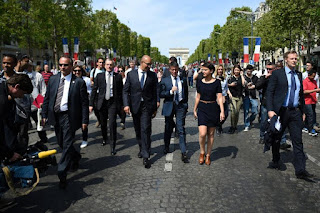 ibtimes : "In the first installment of the year of its monthly pedestrian and cycling days, the Champs Elysées in Paris went car-free Sunday, meeting with encouragement from tourists and locals alike. The famous French boulevard, which can hold up to 10 lanes of car traffic at its peak, was quiet of the sounds of honking and free of the smell of exhaust.

"All of Paris should be like this," one local Parisian told Agence-France Presse. "We have to stop poisoning people; we need to open up the city. There should be more public transport and more taxis, but we don't need cars in Paris.""
at 10:45 PM

Ipswich Star: "“This could be in the form of car sharing, it could in the form of walking, using public transport, or it would be great if people were inspired to get on their bicycles.”

Mrs Matthew said the main benefits of the initiative would be: people living a healthier lifestyle, a reduction of traffic on the roads, participants forming a better connection with their neighbours, and less pollution in the environment.

The idea was first raised at a Cycle Ipswich meeting at the beginning of this year as members felt they needed to do something to empower people to make a change in the way they travelled."
at 9:12 AM